A Fossanova will love not only admire the imposing Abbey, but also stroll through the narrow streets of the small village that surrounds it. It will be a surprise to you get to this village from the purple color, which comes from the ivy on the roofs of houses surrounding the abbey, as a lady, standing out white and impressive with the rose window in the center. The Fossanova Abbey dates back to the thirteenth century and can be considered the first example of Italian Cistercian architecture. Founded as a makeover of the former Benedictine Monastery, he exercised great influence on all of the churches of that region. When we visit with the friars who live there, we will notice the ‘high architectural value of the complex, where you will refresh in the striking cloister, the heart of the whole organism. The four sides then we find the church of S. Maria, a Latin cross with three naves, the chapter house, the refectory and the kitchen. Completing the abbey along the houses of the pilgrims, the monks’ cemetery and the infirmary. Even before the establishment of the Cistercian monks, the site had been inhabited by the Benedictines who had built a monastery under the title of St. Stephen the Martyr, where he had lived too Gregory IV before 827, the year of his election to the papacy. Later, probably around the year one thousand, the monastery underwent the renovation and expansion, of which still remain, well preserved, the three sides of the Romanesque cloister. Some old faces the possibility that the Benedictines have settled on the spot at the dawn of the Order; there would be attracted by the ambitious plan to clean up the area, which offered plenty of space to their time ideal et labora, and a desire to keep alive the small organization of social life that still flourished there, still attested today by the ruins of some Roman villa – even in the cloister garden has emerged during the survey excavations, peristyle of a Roman villa – and those, more consistent and still visible, a spa resort near the church.Since the abbey lay in a marshy place, the Cistercians – that have passed into history with the connotation subsoiler monks and reclaimers, and that as far as the direct run can pursued their own possessions – they began an extensive process of channeling the water reclamation marshy in the nearby river Amaseno. From this impulse of spiritual rebirth – social – economic benefit, according to the typical Cistercian tradition, the new name, Fossa Nuova, which has a transparent allusion to the new vitality. The Fossanova Church, as it appears today, was begun in 1163 – but some historians date the beginning of 1170, others 1187 – according to a more rational and functional system, of the Order, and according to a new taste that was spreading in northern Europe, especially in France, where the Order was founded. Construction of the church lasted for about 45 years – a long time due to a forced stop in the last decades of the twelfth century, probably caused by the friction between the Empire and Common, where all the Cistercian abbeys were involved – and was finally positioned, with rosettes, only around 1300. Even the Emperor Frederick Barbarossa contributed to construction costs – possibly as reparation for war damages – as was evidenced by inclusion on the arch of the portal, now covered with mosaic: “Fridericus imperator semper augustus hoc opus fecit proud “. In 1208, under the abbot Stephen from Ceccano (1205-1212), subsequently elected Cardinal (1212), the altar of the new church, according to the testimony of the Chronicon Fossae Novae, it was solemnly consecrated by Pope Innocent III. The constructive dynamism of the twelfth and thirteenth centuries corresponded to the period of maximum vitality Abbey, attested by the attractive beauty of the monastery, now restored in all its joints.

In 1274 Thomas Aquinas Dominican friar of the time of scholasticism, venerated as a saint by the Catholic Church where he died. Already at the end of the thirteenth century, however, and especially since the beginning of the fourteenth century, began to Fossanova a slowdown of vitality and historical incidence. Between 1725 and 1729 the monastery was honored by the visit of many prelates and the same Benedict XIII. In 1780 it was a guest Pius VI, the Pope who had promoted the reclamation of the Pontine plain, which, also driven by the desire to venerate relics of St Thomas in the meantime had been discovered (1772) by Abbot Pius Piermartini, he took advantage the opportunity to become personally account the problems which had troubled the abbey. The recovery, however, was short-lived, because the French troops of Napoleon, in the first descent in Italy, also reached Fossanova in 1798, plundered the monastery, beat up and put to flight the few religious, decreed the suppression of the abbey to confiscate the goods. In the pitiful state in which it was reduced, the abbey, no doors and window frames, was exposed to the referee of all, when the unexpected defeat of French troops by Ferdinand IV of Naples, rekindled hopes for the return of the monks. These fact reoccupied the monastery for the diligent involvement of Conventual Franciscan, Father Bonaventura Trulli, appointed Casamari Abbey visitor, was able to obtain, with the support of the Neapolitan governor, also the restitution of assets. The other religious were still in the abbey a few years, to abandon it definitively when the Napoleonic, there being back in 1806, again suppressed the monastery and the commendation, even alienating goods. He not saved anything, not even the store that we could provide as much information on the history of the abbey. You only know that many relics, books, artwork, paintings, sacred objects were deposited in Privernati archives of the City and the Cathedral; then returned to the abbey in 1827 when it was entrusted to the Carthusian Fathers today are impossible to find, perhaps because been irretrievably lost as a result of adverse political events throughout the 800 have disrupted the lives of the monasteries. Lately an extraordinary event reported, for one day at least, the abbey to the historical celebrities: the visit of His Holiness Pope Paul VI, who wanted to honor the memory in place of St. Thomas Aquinas. 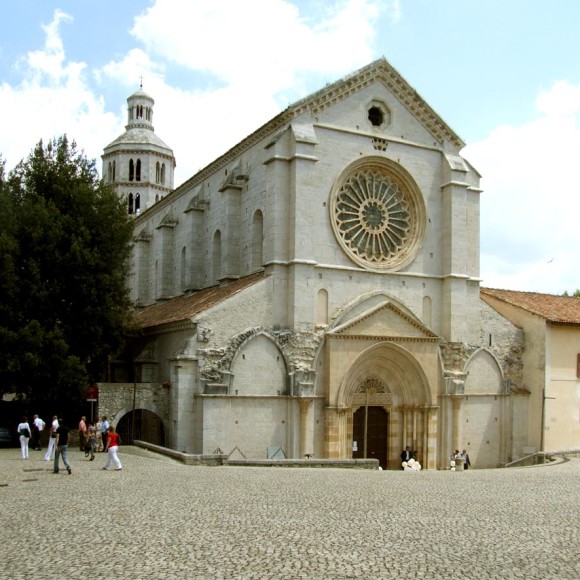 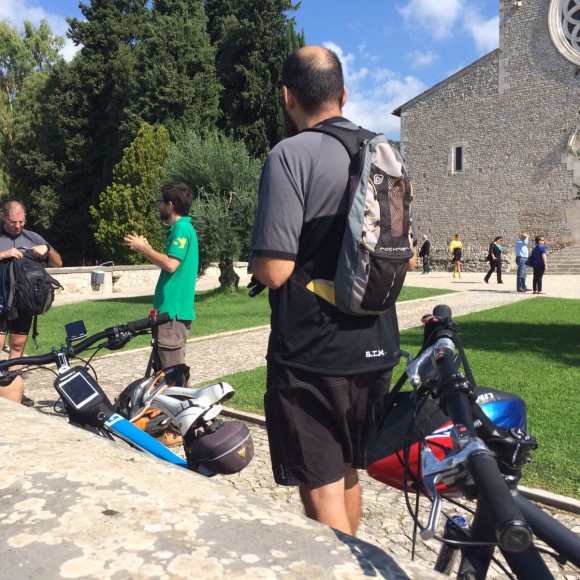