Between Rome and Naples there is a land , told by Homer and Virgil , where the legend is intertwined with the history and the sea frame this . Circeo , the place where Odysseus sank into the arms of Circe … Here Gaeta , who Virgil is named by Cajeta , the nurse of Aeneas , refined place of residence of the Romans, then impregnable stronghold , the ” faithful ” of Bourbons , where in 1861 was accomplished the last event of the unit of Italy .

Terracina with its interesting historic center and the impressive Temple of Jupiter Anxur . Sperlonga , quaint Mediterranean village not to be missed , whose name derives from ” spelucae ” or cave , that is, the Grotta di Tiberio where the emperor had built a luxurious ” cenatio ” surrounded by water and beautiful statues depicting the cycle of ‘ Homeric hero Odysseus … precisely : the Riviera of Ulysses ! 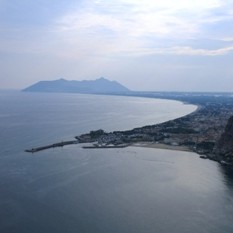